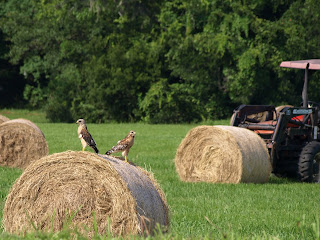 As I was leaving work this afternoon, I was looking at the giant rolls of hay being baled in the field, and something caught my eye. I made a quick u-turn to come back around and saw these two hanging out, i'm sure looking for dinner. The baler must be disrupting the small field creatures they so enjoy. I sat in my car pulled over to the side so I wouldn't scare them away, and managed to get a few pictures. 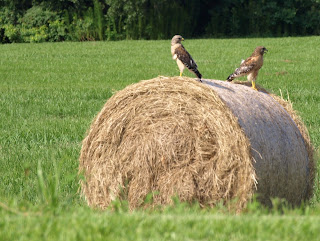 Pretty cool, but eventually they flew off in search of food. Hope they found some! 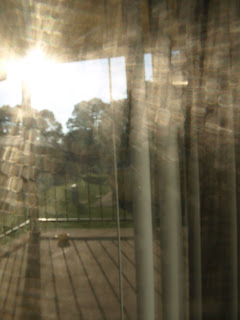 I was really bored the other day, and decided to try a makeshift filter on my camera. I used the trick of a nylon over the lens, and held there with a rubber band. the tighter I stretched it the less you could tell it was there. For this first pic I kept it pretty loose. 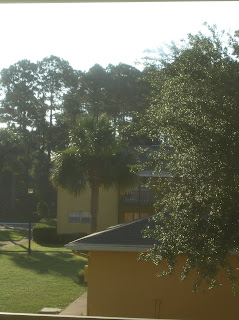 And this is with it stretched very tight. Still pretty muted, but clear.
A couple nights ago we had a very cool light show, as well. it thundered quite a bit, and rained for a little while. After the rain stopped it was all lightning. Mostly it was just the bright white flashes, but there was some orange and reddish light on occasion as well. I also noticed that the lightning mostly forked either upwards or to the side, not down. I have some video of it, but it's very long. If I can figure out how to get a couple smaller chunks seperated, I may even post it. I put my small P&S camera on the tripod, and brought it out onto the balcony. I put the halter and leash on my cat, and we sat, watching the light flash. It was 12:30 am by the time it had stopped enough for me, and then I went to bed.
Posted by Kim at 8:32 PM

wow, pretty birds. Looks like a scene from Vermont. Love the round bales of hay.

Love the hawks! Not a sight you'd expect in Florida with those hay bales. Great capture.