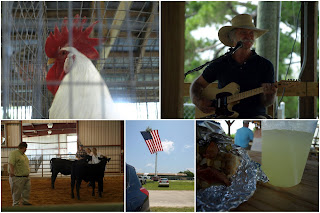 Oddly, I bought nothing containing blueberries. I did have a polish sausage with some onions and peppers, and a nice fresh squeezed lemonade, served in a quart size takeout container. Yum!

They had some seafood and BBQ thai as well, but it was a lot more money than I felt like forking over. There was also kettle korn and I almost got some, but the heat was making the cooker sweat, and that sweat was dripping right into the kettle, so I decided not to go there. ewwww.. 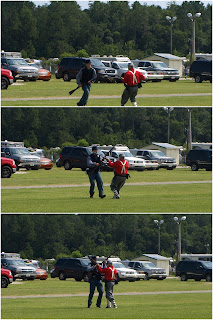 It was pretty darn hot out, so hung out in the barn checking out the poultry and cattle, watching the judging. Once I got my food I made my way to a little open barn to sit and eat, as well as enjoy some country/folk/bluegrass music performed by Ron Davis, a one man band. He played much Johnny Cash, some Willie & Waylon, and some other odds and ends, very good!!

There was also a small civil war reenactment. Bless those people dressed in heavy wool period clothing on this sweltering day.
Posted by Kim at 8:55 PM

Looks like a fun day. I still can't believe you didn't have any blueberries though lol.