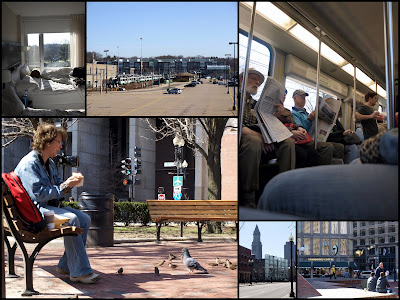 After packing up our things, we checked out of our room, loaded our bags into the car, and drove the 1/4 mile down the hill to the Riverside T station.
So begins day 2 in Boston. Clockwise starting from upper left: Sunrise in our hotel room, view of Riverside T station from the parking garage of the hotel, on the subway heading in to the city, at Starbucks on Tremont St for our morning sustenance, Custom House tower & the Holocaust memorial, Jeanne feeding some crumbs to the birds. Greedy lil things! :)
The weather was beautiful once again!! 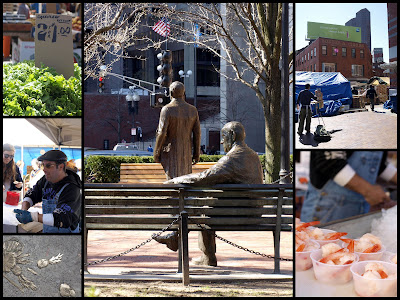 After enjoying our coffee and muffin we headed towards the Haymarket. So many sights, smells and sounds, all at once. Vendors calling out for more produce, prices to prospective buyers, and telling people not to touch the "merchandise". The deals were not to be missed. If our car wasn't so far away, we would have bought lots of stuff. :)
Clockwise from upper left: Lettuce: what a deal!, artist at work, seafood vendor: fresh shrimp for $2/cup (it was delish!), A small piece of street art called Asaroton (meaning unswept floor), Seafood vendor shucking oysters. In the center we have 2 statues of Mayor James Michael Curley. We ended up buying a quart of strawberries for 99 cents. That was our lunch. 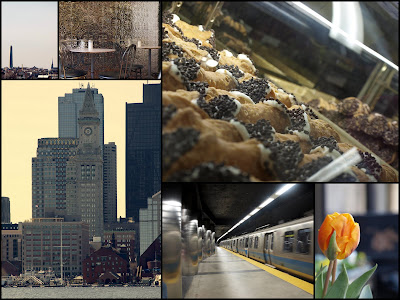 After the Haymarket we headed to the North end.  Had to have a cannoli at Mike's Pastry! We took a short walk along the waterfront, then got on the T and headed over to East Boston, a place neither of us had been to.
Clockwise from upper left: the Bunker Hill monument visible from east Boston, The glass wall and tables at Mike's Pastry, tray of cannolis..YUM!, pretty tulip, Aquarium stop on the Blue Line, Custom house tower from East Boston.

Still more to come from East Boston and beyond. Including some pics from the skyline at dusk from Cambridge!
Posted by Kim at 9:54 PM 5 comments:

Here are just a few more Boston collages to share. As I said we had beautiful weather, and we also really enjoy being there on weekdays so that we get to see the "normal" hustle & bustle of the city. Trying to get on the subway during rush hour is probably the hardest thing. Crowded, and not the least bit comfortable, unless you happen to score a seat. :) 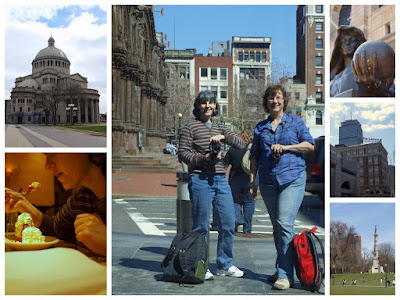 (from upper right and clockwise): One of the Muses in front of the Boston Public Library, The Prudential tower peeking out from behind The Lenox Hotel, the Soldiers & Sailors Monument on the Boston Common, here I am enjoying a slice of cheesecake at the Cheesecake Factory, The First Church of Christ, Scientist (aka The Mother Church), and in the center: Jeanne & I always get this shot of ourselves reflected in the Hancock Tower. The glass seemed especially clean this year! 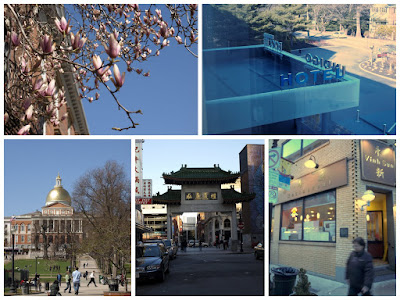 These blossoms stand out against the bright blue sky, the view from our hotel room, the restaurant we ate at in Chinatown before the TSO concert, the gate to Chinatown , and last but not least, The State House. This was the first time we really had a chance to wander around Chinatown, and we loved it. So different and interesting! The restaurant we chose was on a whim, and it turned out to be excellent. After dinner we wandered back to Tremont St towards the Wang Theater. And that brings me to my last collage for Day 1 in Boston. TSO! 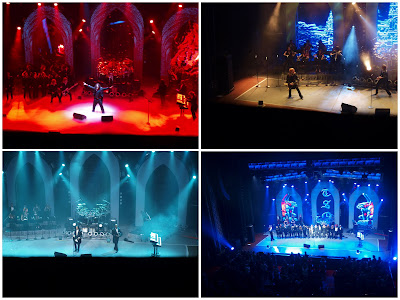 Upper left: Jeff Scott Soto, awesome voice! Upper right: Chris Caffery, Lower right: Taking a bow, lower left: Intermission/introductions. The first part of the concert was "Beethoven's Last Night" in it's entirety, along with narration in between songs. The 2nd half of the show featured a few songs from their newest album called "Nightcastle". Being in a smaller theater, they couldn't use pyro like they  do in the Christmas concert, but the special effects and lasers were out in full force. After the show we made our way to the merchandise table then to the autograph table.
Definitely a night to remember....We made it back to the hotel very late, and by the time we wound down enough to crash, it was almost 2am! Before we knew it, it was up and back out into the city for day 2!
Posted by Kim at 10:42 PM 3 comments: 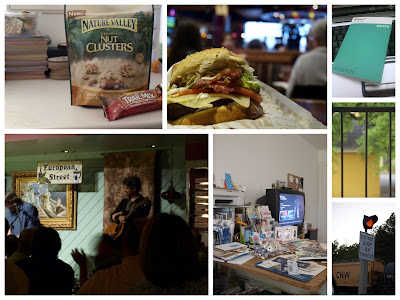 Week 15, (4/9-4/15) clockwise from upper left we have: a free sample I ordered of NV nut clusters, Red Robin bacon & guac burger I had while on vacation in W. mass, a new little Boston travel book to read while at the airport, my balcony railing (in FL) with the laundry building behind it, railroad crossing warning, my poor scrappy desk waiting for me to do some creating, and Slaid Cleaves (Texas folk musician at the European St Cafe in Jax) - Awesome show! Slaid is on the right, watching his guitarist do some Ham bone... 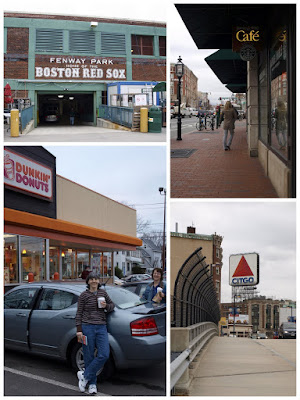 Now for a few of my favorite Boston shots: Jeanne & I got to stay there for 2 days and both were absolutely beautiful weather-wise. We totally lucked out! It had been ages since we'd done an overnight visit, and wanted to get some good evening/night shots. Especially of that familiar skyline. Here are just a few photos from day 1 to start. We each took over 900 shots or so in those 2 days! I was able to get mine down to about 700, and could probably delete a few more even, but that can wait for another day..

Starting at bottom left: We meet at the Northampton Dunkin Donuts and set off nourished with coffee, muffins and the GPS. You don't want to see the traffic on the Pike, it's never pretty. (upper left): here we are at Fenway Park already. Amazing! Flurry of activity there as it was only a few days til Opening Day, and the beer deliveries had to be made. (upper right): the Boston University store/Barnes & Noble, 3 floors of books, college apparel, and Starbucks. (bottom right): The infamous Citgo sign, seen in every Red Sox game on TV. Look for more views of it soon! 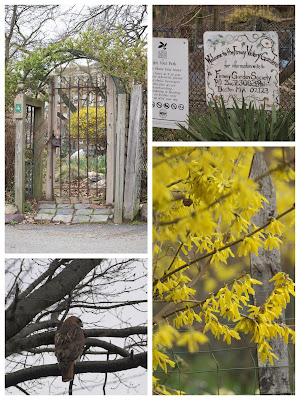 After walking around the Fenway Park area we found the Fenway Victory Gardens. Some people have probably had the same garden plot for 30 years, if not longer. It was so neat seeing gates, and entrances individual to the person who owned it. many plots had little patio areas to relax, and some looked like they hadn't been used in years. Someday I hope to see this area when it's in full bloom! There were a few early blooming plants, and a lot of geese.
The bright yellow forsythia caught my eye against the weathered wood of the fence, as did the beautiful Peregrine Falcon. Or is it a hawk? (correct me if I'm wrong, please!)

Continuing on from my last post, the month of March passed by quickly and onto my regularly scheduled vacation I went. March was very busy at work, and with various cuts being made be it people, time or material shortages, we make do with what we have.

Here are the collages for the last several weeks of Project 365. 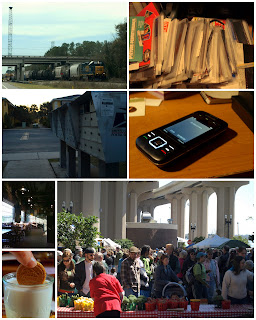 First up is week 10: (3/5-3/11) a train in Jax, my huge pile of negatives that I had to sort thru, my new cellphone, opening weekend for the Riverside Arts Market, Girl Scout cookies with milk, Wednesday before-church dinner at Cracker Barrel, and my apartment mailbox area. 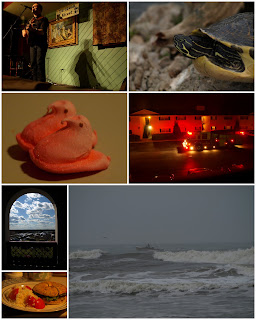 Then we have week 11: (3/12-3/18) Mark Erelli (local up-North Musician) played in Jax, Turtle, Firetruck & rescue showed up at the apartment complex, but no idea why, Rough seas ahead!  Dinner: burger on a bagel thin and a rice & tomato side, view of the St Aug seafood fest from the parking garage, peeps! 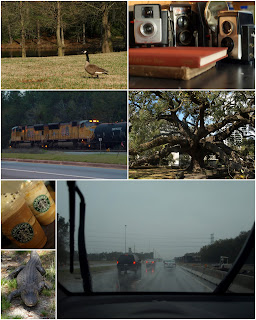 .....and week 12: (3/19-3/25) Goose, my little old camera collection, The Treaty Oak, rainy day, gator up at the Okeefenokee swamp park, Starbucks fraps, and a couple Union Pacific engines (we don't see those too often here). 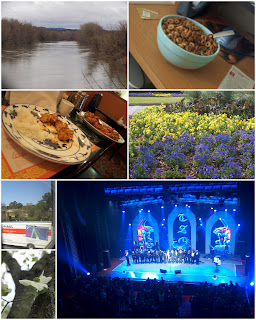 ....week 13: (3/26-4/1) Looking north on the connecticut river from the old trestle/now a rail trail, cereal for supper, flowers near my work place, TSO in Boston!!!!!, flower, moving van in FL with a boston ad on side (thought it was fate), and dinner out with my parents on my first day of vacation. 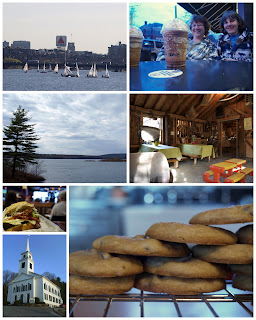 Week 14: (4/2-4/8) Sailboats on the River Charles and the famous Citgo sign in Boston, Jeanne & I enjoying some Starbucks in Northampton, MA, Breakfast in the local sugar house by the wood stove, toll house choco chips, our small town church (westhampton, MA), Bacon Guacamole burger at Red Robin, The Quabbin Resevoir.
Hoping I can avoid playing more catch-up....LOL enjoy the pics! I'll be back soon to share more collages, and more photos from my 2 day adventure in Boston with Jeanne! Have a great weekend!
Posted by Kim at 6:45 PM 7 comments: